The University of Pennsylvania School of Social Policy & Practice (SP2) and Penn Institute for Urban Research (Penn IUR) are pleased to announce that former Philadelphia Mayor Michael Nutter will serve as Senior SP2 Executive Fellow at Penn IUR and will be active in ongoing discussions about poverty and prosperity in contemporary society.

A non-residential appointment, this post will allow Mayor Nutter to engage Penn students, faculty, and alumni on a regular basis on issues related to analyzing and addressing deep poverty in Philadelphia and beyond. Starting this spring, Mayor Nutter will also assist the Penn community as they consider ways to further its continuing institutional investment in research, teaching, and policy around poverty.

“Mayor Nutter is someone who has devoted his career of public service to the idea of making sure that citizens have their needs addressed and their interests protected,” said SP2 Dean John L. Jackson, Jr. “He is also someone who has long been passionate about issues of poverty. Indeed, he couldn’t be an effective mayor of a city like Philadelphia, with one of the highest rates of deep poverty in the country, if he didn’t think about the lives and life chances of poor citizens. It’ll be valuable to have Mayor Nutter’s expertise, insights, and public service background at the table as we think about issues of poverty in the 21st century.”

Before becoming the 98th Mayor of Philadelphia in 2008, Michael Nutter served as a member of the Philadelphia City Council and as a Democratic Ward Leader. From 2012 to 2013, he also served as the President of the United States Conference of Mayors, the official non-partisan organization of almost 1,300 U.S. cities with populations of more than 30,000 people.

“I am honored by the opportunity to work with Dean Jackson, and Penn IUR Co-Directors Dr. Eugenie Birch and Dr. Susan Wachter on the important work of reducing poverty and utilizing the full capacity of the University of Pennsylvania to solve various public policy challenges that Philadelphia and many other cities face in America,” Nutter said.

The newly created role that Mayor Nutter will fill has been made possible in part by the generous support of Barry A. Porter, W’79.

“Penn IUR is looking forward to collaborating with the School of Social Policy & Practice on this important appointment,” Birch said. “We praise Dean Jackson for his foresight and wisdom in making it possible for Penn students and faculty to share the experience of Mayor Nutter, who has translated theory into practice and leadership into action. We feel that having Mayor Nutter as the Senior SP2 Executive Fellow at Penn IUR is the perfect expression of President Gutmann’s aim to have impact on our community.”

“Mayor Nutter was a transformative leader for Philadelphia and under this partnership, he will help inform decisions for a more sustainable, inclusive urban future in the US,” Wachter added. 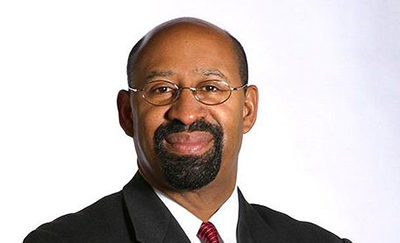 In the guide for caregivers whose child was sexually assaulted on a college campus, Susan B. Sorenson provides advice and...