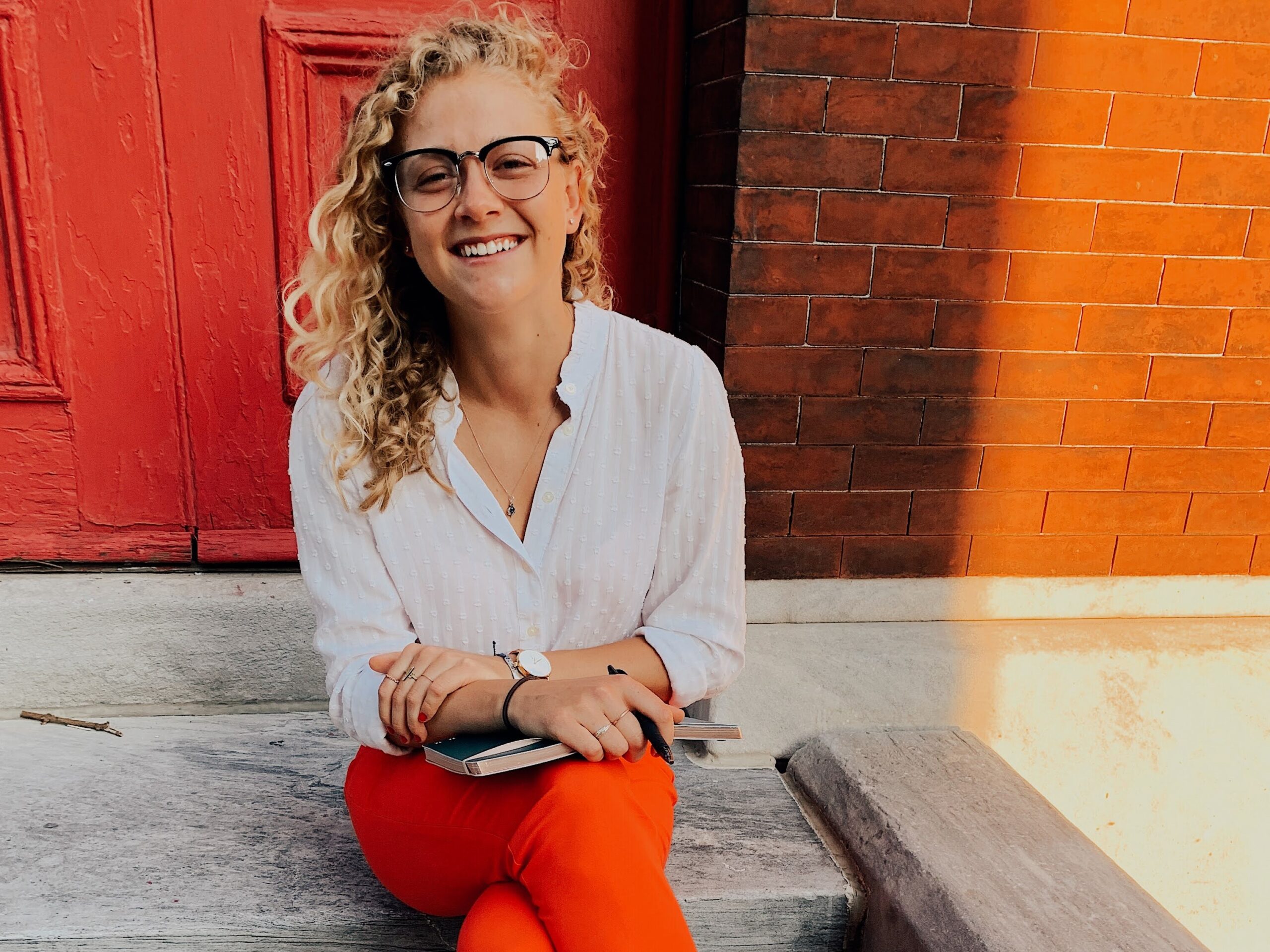 Let’s say that you’re a student, and you’ve just completed your undergraduate studies in the midst of a massive global pandemic. You submatriculated into a graduate program during your junior year and are now completing your master’s degree. You need to figure out how to help fund your education and gain additional experience in your field, all while many workplaces are in a hiring freeze. What do you do? For Olivia Welsh, a student in the MS in Nonprofit Leadership (NPL) program at Penn’s School of Social Policy & Practice (SP2), the answer was to start her own nonprofit consulting agency.

In 2020, Welsh graduated with a degree in Philosophy, Politics, and Economics, with a Distributive Justice concentration, from Penn Arts & Sciences (SAS). She always knew that she wanted to go into government work or the social sector, but the choice didn’t become clear until she began volunteering at Camp Kesem, a nonprofit dedicated to supporting children impacted by a parent or guardian’s cancer. Driven by thousands of volunteer student leaders, the organization has over 100 chapters at colleges across the country. Welsh began as a camp counselor and served as Penn’s chapter co-director for the following two years.

“That’s when I realized how efficacious nonprofits are in achieving their mission, and how they can create real impact in the world. It was a great organization with a great board and great people,” Welsh said.

“I realized that if I’m having shower thoughts about how I’m going to steward major donors at a gala, what’s coming up at the next board meeting, or how we’re going to get Zoom capable devices for our virtual programming—if it’s waking me up in the morning and I’m thinking about it when I go to bed, I should go all in. That reflection led me to SP2 and the Nonprofit Leadership program.”

Submatriculating into the NPL program as a part-time graduate student gave Welsh a chance to accelerate her learning and pursue her passion for the nonprofit sector. It also offered a financially advantageous option that could roll into her existing financial aid package. The NPL program’s coursework enhanced the training and experience that she gained at Camp Kesem, providing a real-time impact on her growth as a nonprofit leader.

“The program’s approach is bridging theory and practice, and that really resonated with me because I already had this leadership role at a chapter of a nonprofit, and I had an incredible opportunity to directly implement what I was learning in my classes on what I was doing at Kesem,” Welsh said. “The ability to do that deepened my understanding of nonprofits, and made me a more knowledgeable and effective co-director. It made me more of a self-aware leader, and more willing to try things out and experiment with the tactics and strategies that I used.”

For Welsh, a particular highlight has been Philanthropy & The City, a course led by instructors Doug Bauer and Greg Goldman. In Spring 2020, as COVID-19 upended every conceivable aspect of the semester, Welsh’s cohort provided grant funding to Philadelphia nonprofits serving populations most affected by the pandemic.

“Philanthropy & The City was a huge highlight in terms of bridging theory and practice, and the practical skills and experiences that I was fortunate enough to have in the NPL program,” Welsh recalled. “We created real impact and gave $55,000 in relief funding to places that really needed it. I’m not sure that you would have that kind of opportunity as a student with many other classes, professors, or programs.”

Spring turned to summer, and Welsh completed her undergraduate studies. As another camp season wound down, she began to consider her next steps.

“I started looking at local nonprofits to try and help me pay for my master’s degree. Nothing landed, and I felt all of the things that you feel when you’re trying to land your first job—frustrated, rejected, uncertain” she said. “But I talked to my dad, and he said, ‘All of your life has been multiple choice… After high school, maybe you go to trade school or college or the military, and then when you’re in college, you have a choice of majors. But once you leave college or wherever the next step is, it’s a free response, and you can make up the answer on your own.’”

“I found that equally liberating and terrifying, but I reflected on it and realized I don’t have to take the same path that all of my friends go on, and I can make it up on my own,” Welsh continued. “A huge caveat to this is that I’m privileged to come from a family where my parents can support me. That’s definitely a big factor which gave me an opportunity to reflect and think, and not go right into a first job for financial reasons.”

As Welsh considered what forging her own path could look like, she came across a B-corp digital agency called Whole Whale, and began listening to their marketing podcasts.

“They had practical skills I could learn that were applicable to development, fundraising, volunteer recruitment—a lot of things that nonprofits struggle with all of the time,” Welsh recalled. “An SP2 post-doctoral fellow named Dan Treglia was a guest on the podcast, so I sent him an email about the episode and told him I was interested in what Whole Whale does. It turned out that Dan and their CEO, George Weiner, were freshman roommates at Penn, so I ended up connecting with George.”

After Welsh mentioned that she was in the midst of transitioning Camp Kesem’s in-person gala to a virtual platform, it was Weiner who gave her the idea to start her own agency.

“George told me that many nonprofits are having to do that now, and they don’t know how. He gave me the encouragement I needed, and access to all of the Whole Whale University courses on things like Google Analytics, Facebook ads, social media strategies, and website design. I just dove in, and the education that I was getting in the NPL program, combined with this, gave me a base of knowledge where I could contribute and be valuable to nonprofits in that way.”

As Welsh began moving forward with the idea, another serendipitous conversation, this time with NPL program director Adam Roth-Saks, led to bringing on her first client.

“I told Adam about what I was thinking of doing, and he said that he might know someone who would be interested in my services. Jodi Roth-Saks, his wife, is the Executive Director at JRA [Jewish Relief Agency, a local nonprofit]. Adam connected me with Jodi, and she was incredibly welcoming. I’ve been working with them for the past few months.”

Welsh helped JRA with transitioning their gala to a virtual platform, and is now using video assets from the event to create social media ads and increase the organization’s email acquisitions and volunteer base. Her consulting firm, Marigold Strategies, has since taken on another nonprofit client, The Harmony Fund, who Welsh is assisting with social media strategies and ads.

“I named it Marigold Strategies because marigolds are companion plants. Wherever they’re planted, they ward off pests, weeds, and harmful animals,” Welsh explained. “Where marigolds grow, they help everything else in the garden grow, too. The idea is that we’re growing together, and it’s mutually beneficial. I help nonprofits utilize digital strategies in a symbiotic relationship.”

As she looks ahead to graduating from SP2 at the end of the year, Welsh is still contemplating her next professional endeavor. For now, reflecting on her hard work and achievements thus far, she is appreciative of the experiences, opportunities, and encouragement that led to successfully utilizing her nonprofit leadership acumen and skills amid uniquely trying circumstances.

“All of the pieces fell into place. I was really lucky to have people around who said, ‘Look, you can do this’. I’m incredibly grateful to Adam, Jodi, George, and Dan for having my back. It’s an incredible learning experience, and I’m very glad that I was brave enough to go all in.”

“I never would’ve thought that I would do this, but I’m so glad that I did,” she added with a smile. “It gave me a pretty good answer to the free response question of, ‘What are you doing after college?’”