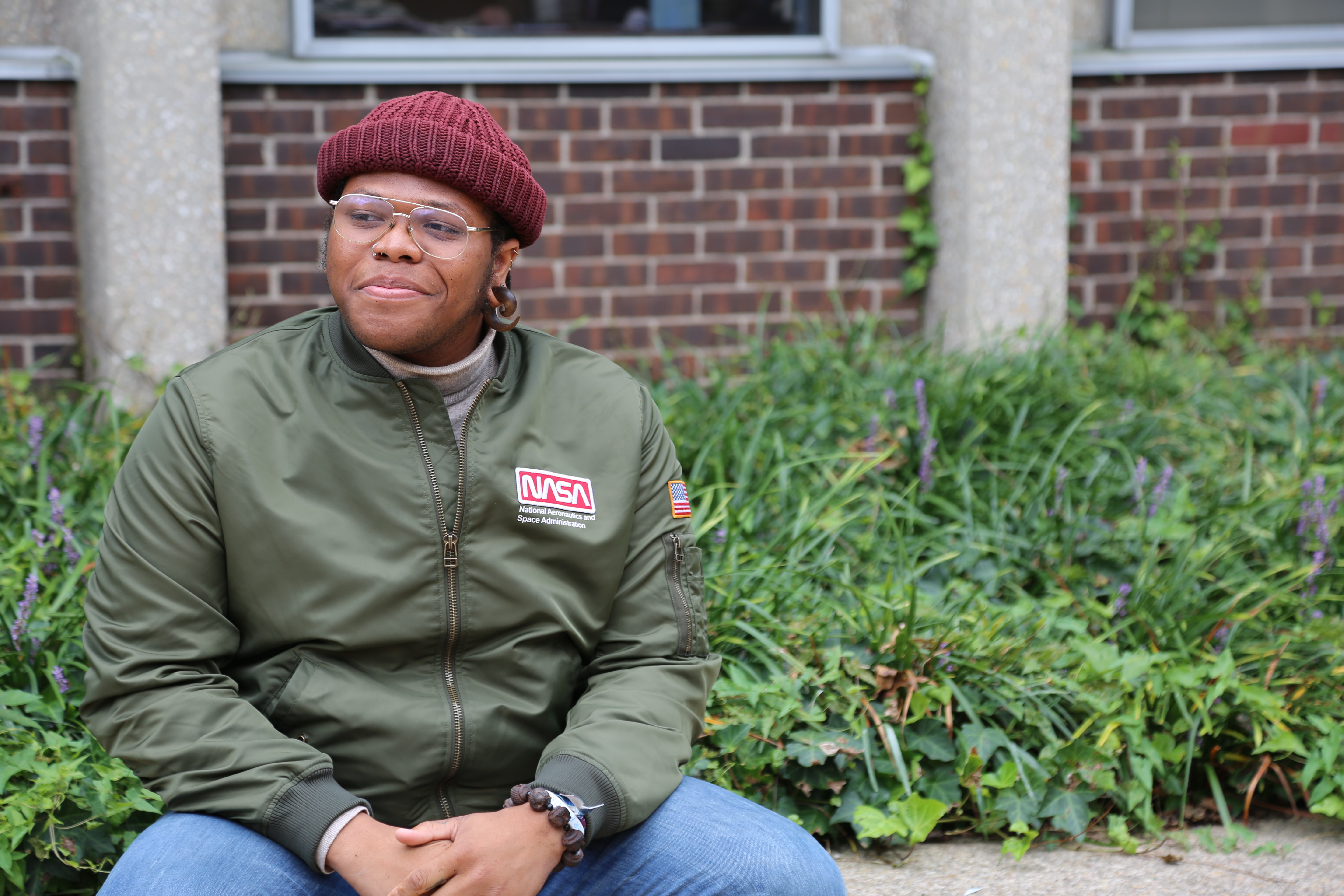 Prior to enrolling in the Master of Social Work (MSW) program at Penn’s School of Social Policy & Practice (SP2), Raekwon Burton, MSW ‘20, began planning his journey as an aspiring social work professional through careful research, self-reflection, and consciously seeking opportunities that supported his ambitions and interests.

At SP2, the journey became both metaphoric and literal, taking him halfway around the world to India, where Burton gained profound new insights about how he wanted to approach his work in the future.

Burton began considering a social work degree while earning a Bachelor of Arts in Psychology at The College of New Jersey. By this time, he had recognized that he wanted to focus on facilitating community engagement and mental health.

“I always knew that I wanted to be a helper. Throughout undergrad, I did a lot of community action and civic engagement on my campus and within the surrounding community that I was from, which was an urban, low-income area,” Burton said. “I decided that a Master’s in counseling or psychology was too narrow for my desires. Social work was a broader degree where I could entertain all of my aspirations.”

In preparation for this next chapter of his education, Burton read about the different scales of social work practice. He was especially drawn to the mezzo category, which entails working with smaller groups and institutions such as neighborhoods, schools, and local organizations to promote communal change that improves resource inventories and the well-being of marginalized individuals. He sought programs that he felt would best align with this type of practice and applied to eight schools in total.

Burton then visited his top four prospects to get a sense of their campus environments and speak with faculty and staff in-person.

“When I came to visit Penn, it had the feeling of a place where I could connect and grow with people and have both intellectual and casual conversations— and everyone here at SP2 was so nice,” he said. “I chose Penn because I really liked the community. Plus, they gave me the most financial aid. I was also offered a GA [Graduate Associate] position on campus, which meant that I received free housing. I already wanted to come here, but that was the icing on the cake!”

Burton has found that his initial impression of the school as a community-minded academic environment has proven accurate. In particular, he appreciates SP2 faculty and staff’s openness to student opinions and feedback, and the school’s willingness to establish forums where students’ ideas are able to be heard by faculty and senior leadership. He has continuously sought ways to get involved and build community, including serving on the SP2 Student Government.

“In academic spaces, things can be recycled a lot. Institutions can accept what is the norm and not consider students with varying experiences and perspectives, but the program here is always evolving, and the professionals here are going with the times and evolving as society and our work evolve. And it’s a reciprocal relationship— faculty, staff, and students are all growing and learning together,” Burton said.

“[SP2] has done that by being open and available, particularly through the student representative positions. There’s a transparency in being able to sit in a meeting where there is so much influence over what happens in the program, to uplift students’ opinions and voices, and be able to tell students what happens in the meetings. There’s an open line of communication, and they make it a collaborative process. I really value that.”

In the first two weeks, students were educated about the organization’s initiatives and sex work in general by the former and current sex workers who hold many of Durbar’s staff positions. Burton then worked on a team with three other students for the course’s research component. The group chose to focus their research efforts on the experience of being both a mother and as sex worker, with the intention of developing a residential youth hostel for children of sex workers in Sonagachi. Over a monthlong period, the team interviewed mothers who engaged in sex work, as well as their children.

“We were in homes, in brothels, and on the street interacting with them and seeing how open they were. It was a lot of face-to-face interaction and understanding that Durbar’s work is based around the mantra, ‘Sex work is work,’” Burton said. “The thought of creating an accessible youth hostel made sense because a lot of mothers have to leave their children at night while they work. The children are either home alone or roaming the streets at night, or the mothers ask others in the red-light district to watch them. The people watching them are often sex workers also, so if they have to go work, they may leave the child alone again. The last option is to send the child to a youth hostel, and most hostels are three or four hours away, so they would rarely get to see their children. There are tutoring programs, but only during the day. We wanted to have something located in Sonagachi and have it run overnight, from 7 p.m. to 7 a.m.”

The team’s research concluded that sex worker and their families would benefit from such an initiative. Following the trip, the group sent their results back to Durbar, with the hope that their findings could inform a future project.

In addition to all that he learned during the coursework and research, Burton’s experiences in India led to a meaningful shift in thinking about social work beyond, and outside of, the dominant Western world ideology.

“Before being at Penn, and even now, I was conscious that I identify with several marginalized groups and identities. I saw coming to Penn as observing the majority up close. I was critical of the majority, but not critical of the entirety of social work—specifically, Western social work,” Burton explained. “When I went to India, it was a time to step back and see that even some of my efforts were painted through white supremacist ideology. In a bigger scheme, social workers were at the forefront of imperialism and Westernizing.”

“I’m from a minority group in America, but I saw that I could be an imposing force on a population with its own culture by coming in with my conceptualization of right and wrong and imposing on a structure where the values are different. I learned to take a step back and be critical of my work in all communities,” he continued. “I’m a person of color and was raised in a low-income community, but now I’m in an Ivy League school and live in the gentrified part of West Philadelphia. I understand that I have gained privileges, and have some perceived prestige I could impose, but have recently recognized the significance of engaging in practice that promotes a sentiment of, ‘Let me value the indigenous populace’s expertise about their own existence.’”

Back in Philadelphia, Burton has found that his insights and reflections from the trip are directly applicable to his local community work.

“I brought back the understanding that at this point, I can speak on how things were in my community, but I can’t really speak for the current conditions for people there now, because I’ve since left that space,” he said. “It has made me more critical of my influence and impact in marginalized communities because it helped me understand that I am a majority in some spaces.”

Looking Ahead, and “The Moment That I’ll Know I’ve Done Everything I Wanted to Do”

After graduation, Burton plans to engage in social work focused on community health and economic development in low-income communities and aspires to eventually have a private practice. His aspirations are a thoughtful amalgamation of all he has learned in the classroom and during his time in India.

“I want to take an approach of working directly with communities, facilitating conversations and support. I’m interested in working in an organization that is creating mezzo-level change in the community, and collecting data to be published and presented,” Burton said “I like the thought of direct research that is also really considerate of the thoughts, opinions, and knowledge of the community to help guide the initiatives. Rather than imposing what I see is missing, it would be firmly rooted in the community, creating efforts that are representative of what the community wants.”

In addition to his academic achievements and community work, Burton is a published writer. He cites SP2 faculty member and former Dean Richard Gelles, PhD, as an inspiration for his interest in facilitating dialogue through writing op-eds. Burton’s recent op-eds have appeared in The New Social Worker and Chronicles of Social Change, and he plans to continue writing and publishing widely.

Even with all of these accomplishments, both completed and on the horizon, Burton’s aspirations don’t end there.

“My biggest dream– the moment that I’ll know I’ve done everything I wanted to do—is doing a TED talk,” he said with a smile.