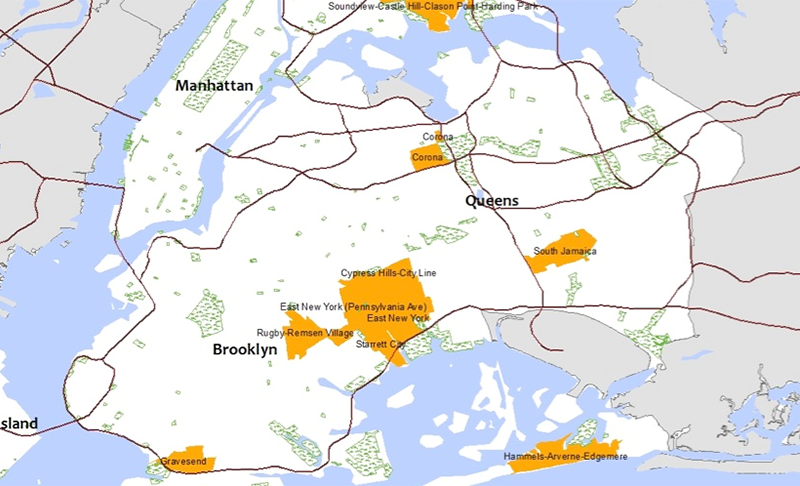 Low- and moderate-income residents in New York City neighborhoods with many cultural resources are healthier, better educated, and safer overall than those in similar communities with fewer creative resources, according to a groundbreaking study by the School of Social Policy & Practice at the University of Pennsylvania. And the results hold true in all five of the City’s boroughs.

The school’s Social Impact of the Arts Project (SIAP) examined New York’s “neighborhood cultural ecosystem” (e.g., creative nonprofits and for-profits, entertainment venues, news outlets, bookstores, artists, and so forth), which makes New York City the cultural capital of the world. While many studies have looked at the economic impact of the arts, this research documented how they improve the quality of life for ordinary New Yorkers. The study was funded by the NYC Cultural Agenda Fund in The New York Community Trust and Surdna Foundation.

“This research confirms and builds on what we’ve seen about the power of art to shape communities and improve lives,” said Kerry McCarthy, director of thriving communities at The Trust. “Our grantmaking boosts the arts in neighborhoods that need it most, so we are thrilled to use the findings to hone this strategy.”

According to the report, culture does not work alone but is one ingredient that makes neighborhoods stronger. The findings will be used by The Trust and Surdna Foundation in grantmaking, and by the City’s Department of Cultural Affairs to design a cultural plan for the city later this year.

In lower-income neighborhoods, cultural resources are “significantly” linked to better health, schooling, and security. The research, which was controlled for economic wellbeing, race, and ethnicity, found the presence of cultural resources is associated with:

Cultural resources, like everything else, are distributed unequally around the City. The most affluent neighborhoods in Manhattan and western Brooklyn have extremely high concentrations of nonprofits, for-profits, artists, etc., while vast areas of the other boroughs have very few cultural resources.

“Going to a museum won’t cause you to lose weight or reduce your chances of being mugged, but communities with cultural resources do better,” said Mark Stern, lead researcher of the project and professor of social welfare and history. “Our research clearly demonstrated that sections of the City are doing well on a number of dimensions of well-being, in spite of significant economic challenges.”

The report provides data on cultural assets for hundreds of neighborhoods and takes a closer look at East Harlem (Manhattan) and Fort Greene/Clinton Hill (Brooklyn).

“This research underscores the critical role arts and culture play in building equitable and vibrant communities. The key data in this research offer invaluable information that will inform our Thriving Culture program as we seek to achieve social justice and community sustainability,” said Judilee Reed, director of thriving cultures at Surdna Foundation.

“The findings of this study prove what we’ve witnessed anecdotally for decades: the arts improve lives. It draws upon our most fundamentally human qualities such as creativity, discovery, and community. We have seen this time and again in MoCADA’s diverse array of arts programming, in schools, parks, and public housing throughout Central Brooklyn,” said James Bartlett, executive director of the Museum of Contemporary African Diasporan Arts (MoCADA).

“From personal experiences with works of art, to regional economic development—no matter how you look at it, art and culture have a transformative effect on our communities,” said Cultural Affairs Commissioner Tom Finkelpearl. “Now SIAP’s groundbreaking report brings us a greater understanding of how these benefits play out on a neighborhood level. This remarkable research makes it clearer than ever: Access to culture is a defining feature of a healthy community. As we continue to develop the CreateNYC cultural plan, we will use these findings to better appreciate and advocate for the role that art and culture play across all five boroughs.”

ABOUT THE STUDY
Understanding the social value of the arts has been the goal of the Culture and Social Wellbeing in New York City project. It was undertaken by the Social Impact of the Arts Project (SIAP) at the University of Pennsylvania School of Social Policy & Practice, along with Reinvestment Fund, a community development financial institution based in Philadelphia. Over the past several decades, experts have paid particular attention to the economic benefits of the arts and culture for cities. Most of these studies focus on the role of large venues—such as museums and performing arts centers—in improving a city’s attractiveness to out-of-towners and college-educated “creatives.” This study looks at the role of the arts in enhancing the lives of ordinary residents, especially those who live in moderate- and low-income neighborhoods. The research was conducted from 2014 to 2016.

Established in 2014, the Fund is a collaboration of seven funders that seeks to strengthen the City’s arts advocacy network and advance cultural policy and equity. In addition to The Trust, donors to the Fund include the Booth Ferris Foundation, Lambent Foundation, Stavros Niarchos Foundation, Robert Rauschenberg Foundation, Rockefeller Brothers Fund, and David Rockefeller Fund. The Fund’s activities include: grantmaking to fortify the arts advocacy network and cross-pollinate policy-related efforts; technical assistance for the sector as a whole; and briefings to review current research and trends in arts and culture and encourage practical application of findings. http://bit.ly/2dUby7q. The New York Community Trust is committed to promoting healthy lives, promising futures, and thriving communities for all New Yorkers. It is the community foundation for New York City, Westchester, and Long Island. nycommunitytrust.org; @nycommtrust