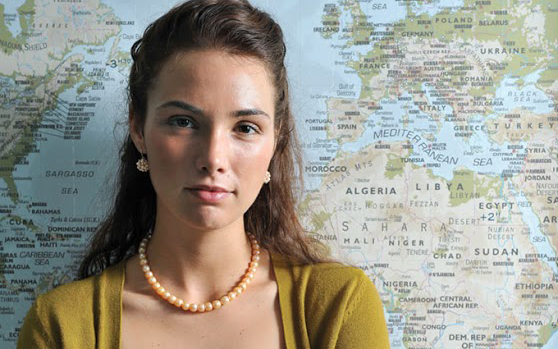 According to the U.S. State Department, human trafficking is one of the greatest human rights challenges of this century, both in the United States and internationally. An estimated 27 million adults and 13 million children around the world are human trafficking victims who are being sold for sex, labor, and even organ harvesting.

According to the U.S. State Department, human trafficking is one of the greatest human rights challenges of this century, both in the United States and internationally. An estimated 27 million adults and 13 million children around the world are human trafficking victims who are being sold for sex, labor, and even organ harvesting.

Recent MSW graduate Tara Anne Matthews, first witnessed the effects of trafficking in 2007, at La Mariem orphanage in Rabat, Morocco. “I saw mothers from all regions of Africa tearfully dropping babies at the orphanage before seeking work in Europe,” she explained. “These women would come in groups, with one or two men waiting impatiently outside. The women expected to come back for their children when they had earned money, but most never came back because they were trafficked into prostitution through fraud and coercion in Europe.”

In 2009, Matthews created a trafficking awareness group at George Washington University called Trafficking Free GW, which aimed to address trafficking in persons at a local, national, and international level. Impressed by SP2’s study abroad program, she then applied to the school and was encouraged by Dr. Richard Estes [Link to: People > Emeritus Faculty > Richard Estes] and Dr. Irene Wong [Link to: People > Standing Faculty > Irene Wong] to pursue an independent research project on trafficking in Israel. Her study there revealed some disturbing findings.

“The government of Israel formally profits off of illegal brothels with known trafficking victims through local taxes,” she says. “In addition, laws involving migrant labor practices promote trafficking in the forms of forced labor and indentured servitude. These problems are complicated by border issues involving former Palestinian laborers and the rampant influx of former Soviet immigrants.”

Her deep commitment to helping eliminate human trafficking led Matthews to choose a field study with the Protection Project. Founded in 1994 and based at the Johns Hopkins University, School of Advanced International Studies (SAIS), the Protection  Project is a human rights research and training institute, which aims to eliminate human rights violations here and abroad. Matthews worked with the nonprofit to assist victims of trafficking, domestic violence and labor exploitation in Egypt and Jordan by providing direct legal service and advocacy for policy change. “Women in these countries who are victims of human rights violations have very little legal recourse,” explains Matthews.

In 2009, the Protection Project partnered with Alexandria University Faculty of Law in Egypt to establish the first legal clinic in the history of the country. Now a mandatory part of the curriculum for third and fourth year students in the English Department, the clinic aims to advance the legal expertise of both faculty and students. Participants in the semester-long program provide assistance to vulnerable members of the community by helping pro-bono lawyers prepare cases. Students work closely with local civil society organizations to identify possible clients, and collaborate with clinical professors to interview and advise clients, conduct research, collect evidence, study case law, and draft legal arguments. To help broaden their expertise, last summer the Protection Project brought law students and faculty to Italy for an international conference on human trafficking.

As a result of this collaboration and the extensive global knowledge and experience of Protection Project staff, the organization is currently working with the Iraqi Council of Representatives and Council of Ministers on drafting a comprehensive anti-trafficking law based on the principle of non-punishment of the victim. The Protection Project is also collaborating with Iraqi NGO’s in organizing a national public awareness campaign aimed at preventing trafficking and strengthening the mechanisms of protection of victims within the country.

For her part, Matthews explored ways the Protection Project could expand the program to meet additional needs of the women who accessed the clinic. “Women served by the program face a myriad of obstacles beyond their legal challenges so we were looking at ways to meet some of their broader needs such as medical access and shelter.” She also worked with the organization to help adapt the legal clinic model for Jordan. “The culture in Jordan is very different than in Egypt,” she explained. “In order for a clinic to be successful there it must address those differences.”

As an undergraduate at GW, Matthews studied International Affairs. While she has an avid interest in international issues, she felt that her classes lost sight of the human element of world problems. “So many decisions are based on economics or politics without a thought to how they will affect the day-to-day lives of the people who live in these countries,” she says. “I decided to pursue a Masters degree in social work with an international focus so I could be a voice for people on the ground level.”

Tara was selected for the Presidential Management Fellowship (PMF), a prestigious two-year paid government fellowship at a United States government agency, and currently works as a Management and Program Analyst for the U.S. Department of Homeland Security.

“SP2 has enabled me to enhance my skills in research, program development, program evaluation, and statistics. I hope to use these skills to contribute to future efforts to measure the quality and effectiveness of anti-trafficking programs,” she says.