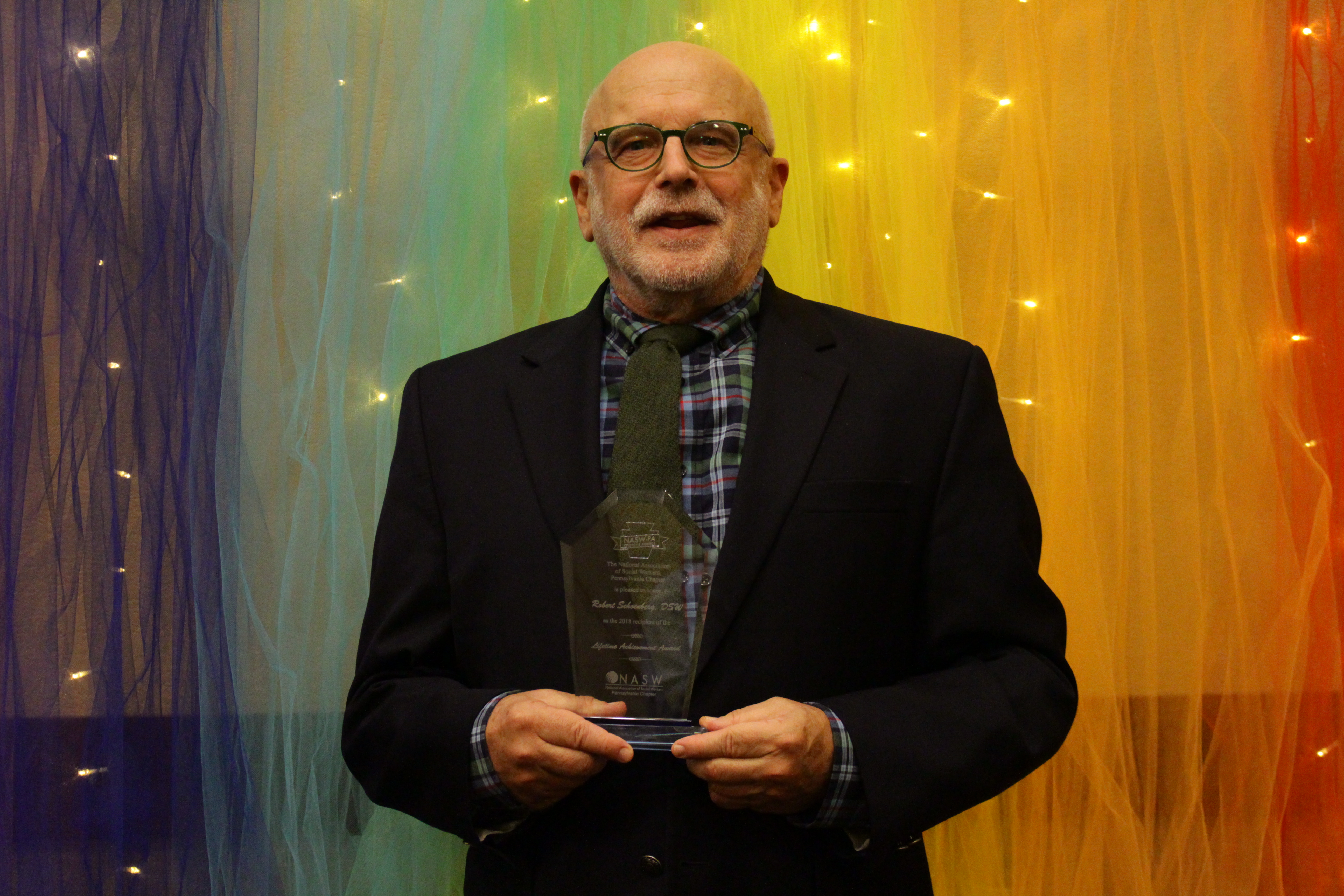 Bob Schoenberg, a double alumnus from Penn’s School of Social Policy & Practice (SP2), was recently honored with the 2018 Lifetime Achievement Award by the National Association of Social Workers – Pennsylvania Chapter.

A passionate pioneer in the field, Schoenberg’s some four decades of LGBTQ advocacy, research and leadership is perhaps only outnumbered by the lives he’s impacted, directly and indirectly; in his time, he’s supported thousands of students who were coming out, seeking help, and negotiating changes on campuses to bolster inclusivity.

For 35 years, Schoenberg was the Director of the LGBT Center at Penn—its first and only leader until his retirement in 2017. The Center itself was created while he was a doctoral student at SP2.

The tenure of Schoenberg’s career has included teaching courses at Penn, Bryn Mawr College, and Rutgers University, and consulting at several other universities. He’s edited the collection, “Homosexuality and Social Work,” and co-authored, “Our Place on Campus: Lesbian, Gay, Bisexual, Transgender Services and Programs in Higher Education.”

In the 1980s, Schoenberg was a member of the first Mayor’s Commission on Sexual Minorities in Philadelphia and was founder and first President of ActionAIDS, now Action Wellness, Pennsylvania’s largest HIV/AIDS service organization. He’s served on the Board of Directors of the LGBT Elders Initiative and is currently a member of the Community Advisory Board of the Penn Center for AIDS.

In the early 2000s, Schoenberg helped raise funds to provide a new home for the LGBT Center and oversaw the renovation of the historic Carriage House at 39th and Spruce streets. In October 2017, the site was rededicated as the Robert Schoenberg Carriage House.

The list goes on, so it comes as no surprise why tribute would be paid to one’s life. And though he’s hung up his hat at the Center, Schoenberg still has work to do and a few pointers for those looking to change the world.

1. Any advice to current students at SP2 who are looking to make a difference in the world?

“My advice for budding social change agents is to find the problem areas which disturb and move them, identify allies in the quest, and get to work. Their efforts are very likely to succeed if they follow essential social work principles and values. I also advise them not to be rigid in pursuing a specific course of action, but rather to seize opportunities which present themselves and may not make complete sense to them at the time. As I see it, careers make much more sense retrospectively than prospectively – mine certainly did – and taking the chance on an unplanned or unexpected opportunity can ultimately lead to a satisfying lifetime career, as it did for me. If it happens not to make sense ultimately, social workers are great generalists and other possibilities can be pursued.”

2.  It’s been about a year since you retired from the LGBT Center. How have things been since? Any big projects in the works?

“My retirement has been largely very satisfying. I’m not sure I have it completely figured out yet. It appears to be a phenomenon for which no one is adequately prepared ahead of time. Colleagues who retired before me have advised giving it time and it will make more sense. I had a made a list of retirement ‘projects’ and have completed one or two of them. There are many more that are untouched. I am kind of amazed at how busy I am and often wonder how I accomplished everything I needed to do outside of work when I was employed full-time. With a variety of volunteer projects, social engagements, cultural programs, medical and dental appointments, etc., on some days there is almost no time to relax and enjoy not having to work. I was never very good at sitting around doing ‘nothing.’ I think I should try it. I once heard it called ‘planned spontaneity.’ Time will tell.”

3. Can you offer any words of wisdom to future LGBTQ activists and the very important work ahead of them?

“Keep up the good fight and pay particular attention not only to one’s own sub-strata, but also to others different from oneself in the larger community. There is sexism, racism, and trans-phobia in the LGBT realm. Many think the fact that the surrounding community is more familiar with and accepting of LGBT communities renders the work easier and less necessary. But, especially at this moment in political history, it is vital to undertake and to keep fighting. And, of course, take care of yourself and take care of others in the work.”