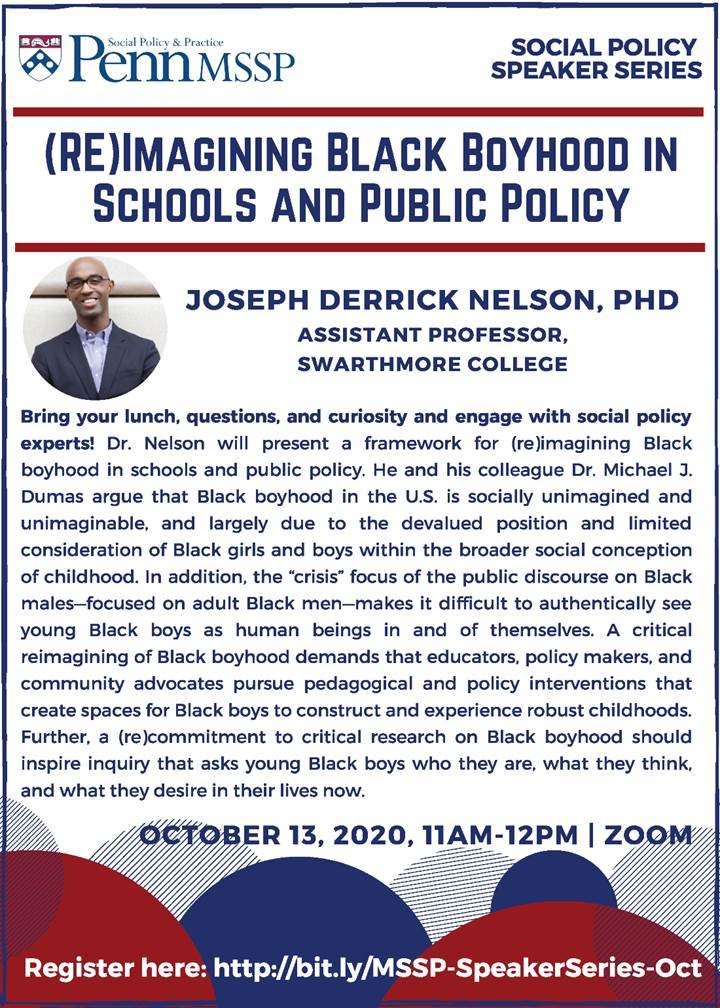 Joseph Derrick Nelson, PhD is Assistant Professor in the Department of Educational Studies at Swarthmore College, and affiliated faculty with the Black Studies Program. He is also a Senior Research Fellow with the Center for the Study of Boys’ and Girls’ Lives at the University of Pennsylvania. He is a sociologist of education, and his research examines race, boyhood, and schooling within learning environments that largely serve Black students from neighborhoods with concentrated poverty. His multi-year projects to date have led to publications with Teachers College Record, Harvard Educational Review, and co-editing a special issue on boys’ education with the Journal of Boyhood Studies. He recently co-edited the Routledge Handbook on Boyhood in the United States, and his forthcoming book with Harvard Education Press is entitled, Unjust Resilience: Black Boyhood, Academic Success, and the Middle School Crisis. In public media, his research has been featured in the Washington Post, The Atlantic, and National Public Radio. This year, he was named an Editor of the historic journal, Men and Masculinities. In his hometown of Milwaukee, Wisconsin, Dr. Nelson taught first-grade in a single-sex classroom of boys of color, in the high-poverty neighborhood where he grew up.

Dr. Nelson will present a framework for (re)imagining Black boyhood in schools and public policy. He and his colleague Dr. Michael J. Dumas argue that Black boyhood in the U.S. is socially unimagined and unimaginable, and largely due to the devalued position and limited consideration of Black girls and boys within the broader social conception of childhood. In addition, the “crisis” focus of the public discourse on Black males—focused as it is on adult Black men—makes it difficult to authentically see young Black boys as human beings in and of themselves. A critical reimagining of Black boyhood, the authors contend, demands that educators, policy makers, and community advocates pursue pedagogical and policy interventions that create spaces for Black boys to construct and experience robust childhoods. Further, a (re)commitment to critical research on Black boyhood should inspire inquiry that asks young Black boys who they are, what they think, and what they desire in their lives now.