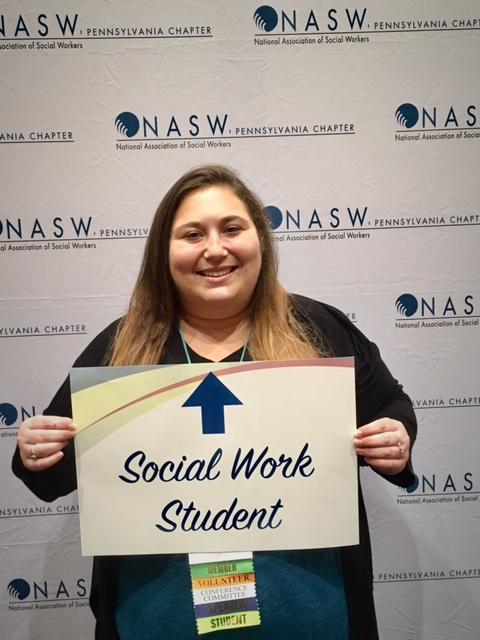 Late in 2017, Master of Social Work student Liane Friedberg participated in a panel discussion during the National Association of Social Workers (NASW) conference. In her own words, Friedberg discusses the value of active participation with the organization and reflects on her time at the conference. Learn more below:

“My experience attending National Association of Social Workers (NASW) conferences has always been remarkable, especially as a student. Over the last several years I have had the opportunity to broaden my education, meeting with different agencies to learn about their missions, and getting to network with other social workers. Last year when I attend NASW I was a member of NASW-PA and as well a volunteer and because of my perseverance in participating I had a bigger involvement and impact as a student. This past year was I very involved in my division steering committee, conference planning committees, and was recently ask to be on the Student Task Force. As a member of the Student Task Force, I was ask to patriciate on a panel discussion. I discussed why I joined as student member and why being a member of NASW is important for professional development.

I first became a NASW member back in 2014 as a BSW student. For me, NASW has always been an important part of my social work education. As a micro or macro student NASW is a place where social workers can come together and build a strong community. This is one of the major reasons why joining NASW is important. It is people just like me who want to impact peoples’ lives and change laws. Another important part in joining is having a reduce rate in conference fee to be able to network. When attending NASW-PA Conference last year, I didn’t really know anyone and it was a little nerve racking, but once I met one person they introduced me to another person and then other and so on. Since last year, I have continued to keep in contact with many people I have met and that encourage me to get involved and have a student’s point of view in the planning process.

My favorite part of the conference was being able to speak on a panel (besides the indoor water park) and the reason why it is important to be a member and involved as a student. During my time speaking, I explained how my undergrad professors where very persistent on the students being involved because of the student price advantages, the different workshops that we are able attend on a student member rate, and the many connections you will find. I personally am passionate about networking and trying to get involved. I realized I didn’t need to hold a board position to become involved and that you can start with in the division you live in. I wouldn’t have been involved if it wasn’t for my division chair taking me under her wing and her eagerness to have a student on the committee. By going to conferences, like NASW-PA, you will meet so many people and people that have the same interests as you who could be potential people to reach out to when looking for a job.  As I explained to the students it is a great feeling going to the conference and getting excited to see the familiar faces I’ve met for the first time last year.

As a student, I never realize the impact I could make within the NASW-PA Chapter: as a student volunteer at conference, on my division steering committee, as a member of the Student Membership Task Force, and as a member of the conference committees my voice is heard, I am making a difference. As I said goodbye to the people I knew, and the new relationships I formed, I was thanked for all help I put in and the active participation I gave during the entire conference, I was appreciated me. This really made me feel good about the work I put in and what I contributed. I hope that one day there will be more students who will take advantage of becoming a NASW member, volunteering at conference, and network with other members because you will never know who you will meet and how you may make an impact on the organization as a student.”